After our visit to the Cosmic Ray Laboratory (CRL) and the  Radio Astronomy Center (RAC), our whole image of Ooty did a backflip. Furthermore, learning about the presence of the potato research facility, water and soil erosion research facility and the tribal research facility convinced us that Ooty is a learner’s paradise. Our enthusiasm to share this ‘rediscovery’ with children kept on building. We finally found an opportunity to take the children to the Cosmic Ray Laboratory(CRL) and the Radio Astronomy Centre(RAC) in Ooty. RAC had opened up its research and its facilities for the public on the 28th of February, 2017, the National Science Day. Soorya and Nitesh, aged 10, two among the children who travelled with us, share their experiences of the day. 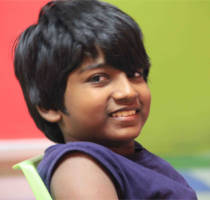 Yesterday, early morning me, my sister and my grandmother got up very early as we were all excited go to RAC in Ooty. We met Obuli Anna and Arumugam anna at Saibaba Kovil and then we started traveling with a lot of other students. And then Arumugam Anna formed a team and in my team was Rithanya, Rhea and me. And then we started playing dumb charades and hand cricket. After a very long travel, we reached RAC and we saw countless stalls. The most awesome stall was silkmoth stall and my team Rithanya, Rhea and I, all had chances to harvest the silk.

We then went to science hall and my team and I saw sunspots, infra red, ultraviolet and gamma ray telescopes. And we went to the cosmic ray centre and we all saw all types of detectors and surprisingly we saw a supercomputer also. Then we all had lunch. After learning lot of new things, we started coming back in the bus to Coimbatore and in the bus our teammates were talking funny things and again we played dumb charades and hand cricket. Obuli Anna and Aru Anna talk to children very patiently and teachers should be like them, my Avva (grandmother) said to which Divya and I said, “Yes! Yes! Yes!”

Well, it was few days before hitting science day. Even worse, I came to know that our science class was taking us there. Which was a whatsapp group, so I had no chance of escaping. Soon I was set. My friend came along too.

Well! Just as I expected, I forgot about the plan of sneaking some snacks in and as usual got up and changed, Just take it that I overslept. When I slept, my brain goes in for a wash, so I was kind of confused to see my friend, Ananth. I didn’t know what was up with others until I got a fresh reminder from mom! I was late to wake, so we rushed with last minute preparations. In the car, the stupid MP3 had some problem. I just got a random song on and we were there. Obuli, Ameer and Arumugham sir were there. We had to go by bus, we paid and boarded. We had no space, we stood for a while. Then we stopped at Saibaba colony for 2 reasons

Ananth and I rushed to the new bus, though smaller, had more space. Finally both buses were full. Ameer and Aru sir were in our bus and Obuli sir in another. We split into 4 teams. I thought, I knew no one there, but I saw Suriya and Sathvik, my old buddies. The team thing was a total disaster.

We all were separated. Noooooooo!  Ananth and I hatched a small plan. We got the sirs distracted and soon a boy and Ananth exchanged places. For a while I clustered bags on him and around him so no one would notice. But the other boy forgot he had to hide. Aru sir was coming!. To save my trip, I distracted sir, till all boarded and the bus started.

NOTE 1: Sorry, my brain power is weak, so I forget things and get confused.

As soon as we started we had fun, games, snacks, breakfast and stuffs… Finally we reached around 11am. The place was cornered with buses. So we were dropped and the bus went downward for space. We entered it! First we went to the ORT line. It was on radio waves and transmission of colors. I didn’t understand much though. I squeezed out of the crowd and found a place to sit. Suriya and Ananth meanwhile had DECLARED WAR! They found two sword sticks, after chasing for a long, Suriya bashed his opponent. SURIYA WINS!

It became boring soon, but Sattvik and I found something interesting. We saw people crowd around a person. The sign showed “Ask an Astronomer”. Well people were asking different questions on space and received answers. I asked some on the current launch of PSLV and who donated how many satellites. It was from US, India and China. After that I hung up to listen to another question. There was no connection between the questions, so I am 100% not to be an ASTRONOMER. I found it was not worth it!

Anyways, Ananth and I got hold of his wallet and purchased snacks like Just jellies, Candies, Chips and stuffs. The food and adventure was definitely worth it!!! With snacks we hung around and saw some projects in an exhibition. They explained life on a farm in one and desert in another. I just listened to the water life. How sea animals live and the law of water life. Just as I was listening in depth, Suriya called me to show a house filled with pictures and info. We read about outer-space and took pictures. We played there with Suriya’s teacher. We literally played “Hide n Seeky”. . . After that Obuli anna called us for lunch and we hurried up. We took our lunch from the bus. We sat near the “Science Day” area. We ate like the Hungry Dogs!

Then we had to leave, but I got a surprise! Obuli anna had got special permission to the CRL! It was so interesting. DEFINITELY WORTH IT! We learnt how they captured cosmic rays to find something new in space. We also learnt on the maintenance part! Here comes fear. We entered the modules room where each one had 3000 modules. I was really scared! It was there to capture rays. They concentrated only on Muon rays so to avoid all others, they kept a thick concrete, Muon is the strongest, so it can pass through the concrete! We also learnt and came to know what each did there and their meetings! We thanked them and Obuli anna and returned home.

We started our journey back. We stopped for tea, so Ananth and I bought some snacks (He slept, only I worked!). I bought mom, dad and aunty, 200g of chocolates and a card. We boarded, we continued.  Soon after,zzzzz It was fun, quite worth learning. I am pretty happy.